Since we haven’t had meatballs for a while, I decided to make it for lunch. It is called Bola-bola, a Filipino version of meatballs. The name Bola-bola came from the Filipino word for ball which is “bola”.

Everyone in the family loves Bola-bola because it is easy-to-chew and yummy!  In fact, it is one of my family’s favorite – whether it is with beef, chicken or pork, we wouldn’t say no to it! 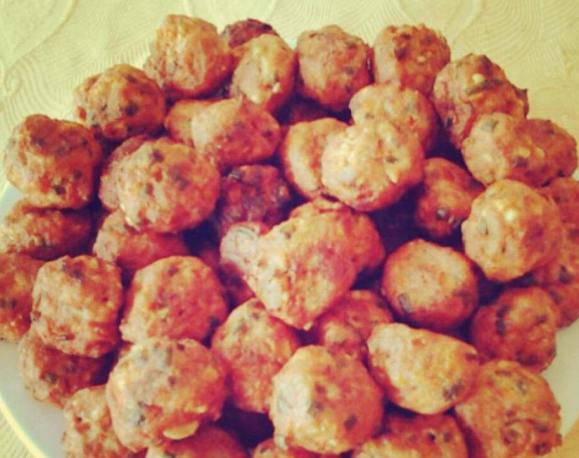 Bola-bola, one of my signature dishes. 🙂

Bola-bola is one of the first dishes that I learned to cook from my mum. I love the astonishing flavor of this dish. Even though it is time consuming to prepare it, I think it’s all worth it. I find it a versatile dish because you could add your ingredients according to your preference and whim. It can be a main dish and it can also be an appetizer. If you wish it to be a main dish you can put more meat than veggies. But if you want it as appetizer, mix it with many varieties of veggies so it won’t feel too heavy on your stomach.

With my bola-bola recipe, I use all-purpose flour as binder. Also, I either deep fry or bake them, the result is the same, delicious. And I serve it with steamed rice and tomato ketchup.

We love potatoes! Whether roasted, boiled, cooked, baked, or fried. Apart from the fact that they can be cooked in so many different ways, they’re also perfect for a healthy balanced diet as they’re full of fiber and provide a significant amount of vitamins C and potassium. 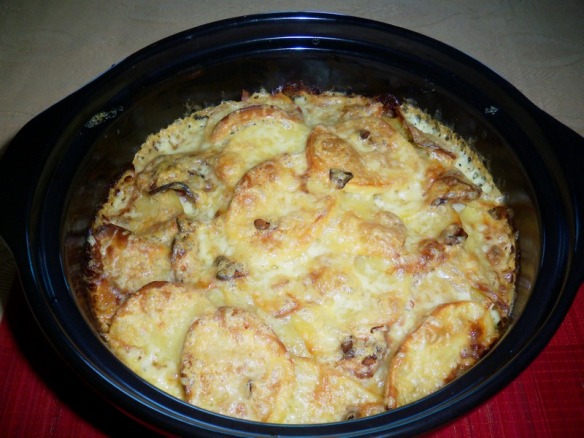 Last week, Alan baked an utterly irresistible French dish called Gratin Dauphinois. It has few ingredients but it is oozing with flavor. It is crispy on the top and bottom. It has a rich and cheesy taste.

We are not only fond of visiting places which are famously known around the world, but we also believe that there’s nothing like better than to travel to a little-known destinations. It feels like we’re making a new discovery that no one else knows about. 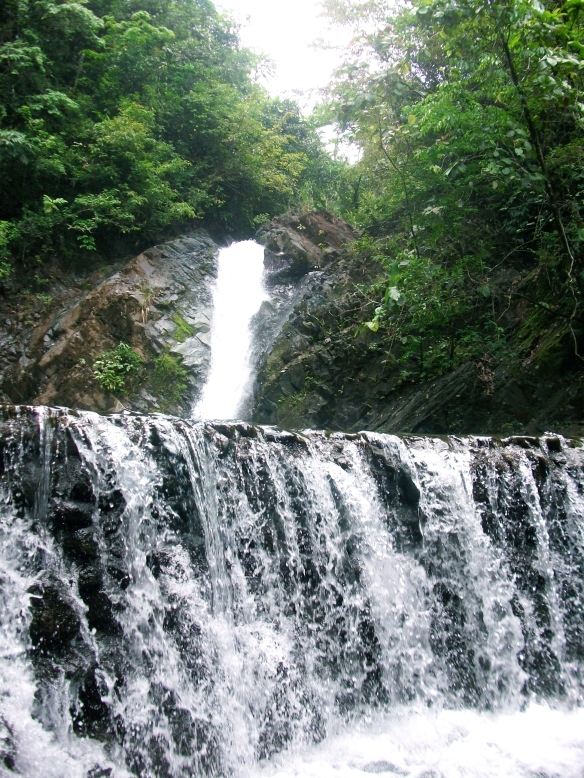 Since my family and I have always been fascinated and delighted about nature and its unfolding sceneries, we decided to go to Magkawas Falls. It is one of the many local gems of the province of Surigao del Sur and it is particularly located in the municipality of Lanuza. I went there with my family except mum as she was busy looking after her small shop. 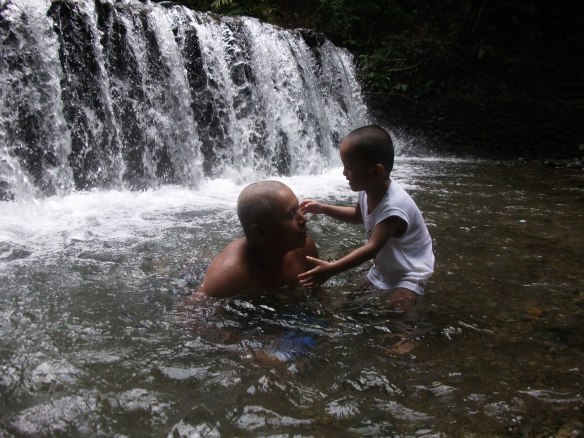 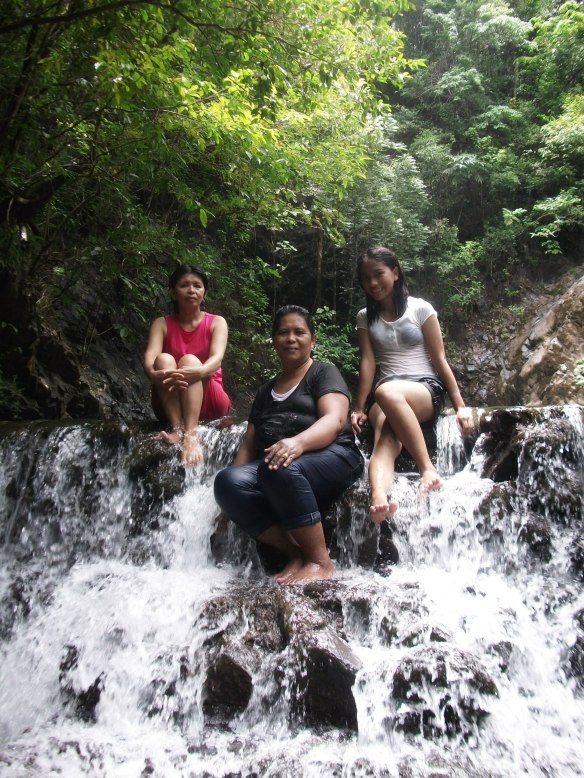 From the National Highway, Magkawas Falls is enfolded about a 430 meter into a lush and green paradise full of interesting and delightful species of plants and animals. We hiked for about 10 minutes on a wet terrain and even though the field was not so rough yet, it was still beyond the bounds of possibility for any form of transportation to negotiate. We crossed the stream and walked under the vegetation that was quite thick. It was very inspiring as we felt like we were inside a cocoon. Plus, the gentle flow of the water and the wonderful sounds of the cascades coupled with the chirping of the birds and the whispering sound of the wind made us feel that we were once again in a paradise. 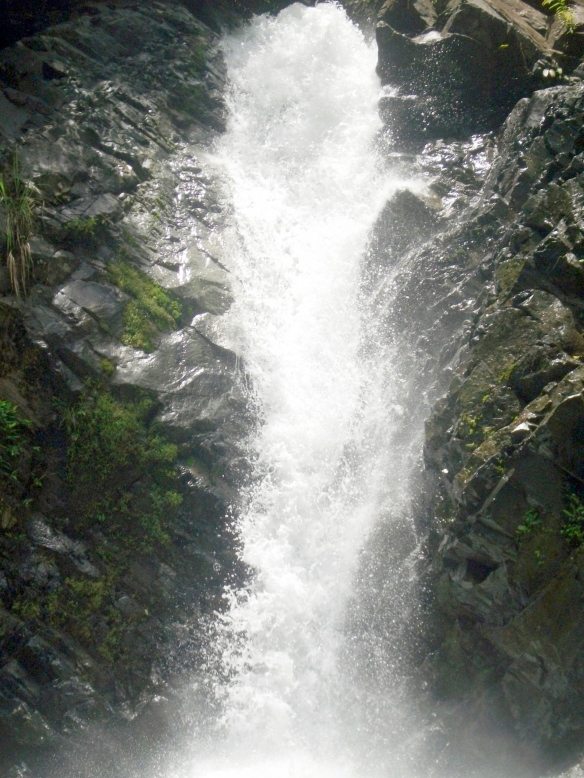 When we went there, the weather was quite good and there was no other visitors at the time. The irresistible gushing of cascading water made all of us to take an exhilarating dip. All of us including my son enjoyed the clean, fresh and cold water which was coming from the heart of the jungle and downpour to its falls. The water was both cold and refreshing. Indeed, we had a good swim and had a very relaxing time. By enthusiastically experiencing Magkawas Falls, it relaxed and refreshed our minds, and lifted our imagination infinitely. 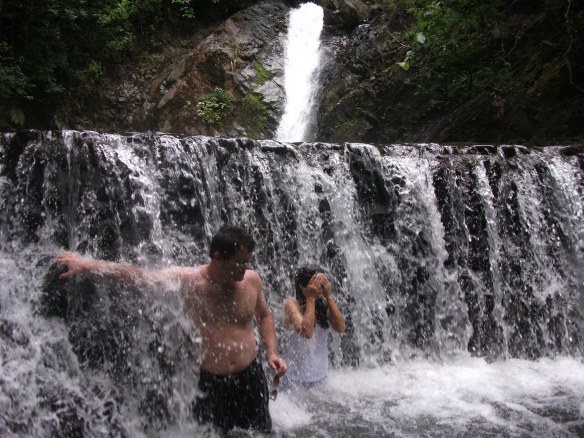 We brought some food for our lunch as there was no restaurants or small shops there. We had lunch near the falls. We sat on the rocks while we were enjoying our lunch. The ambiance and the excellent view that Magkawas Falls created was just brilliant.

It’s the time of the year again where Phnom Penh will once again come alive celebrating the Water Festival. 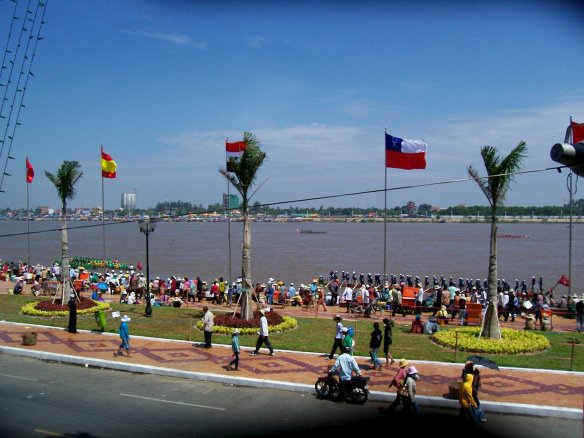 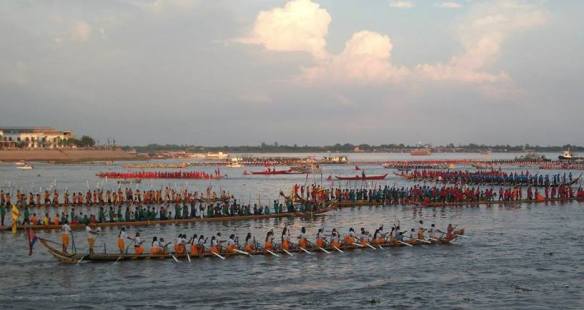 The Cambodian Water Festival is one the most awaited festivals in Cambodia and one of the most attended with thousands of locals and foreigners alike observing it every year. We were able witness the water festival twice and we had spanking good time observing the boat race, fluvial parade, fireworks and going around the city. 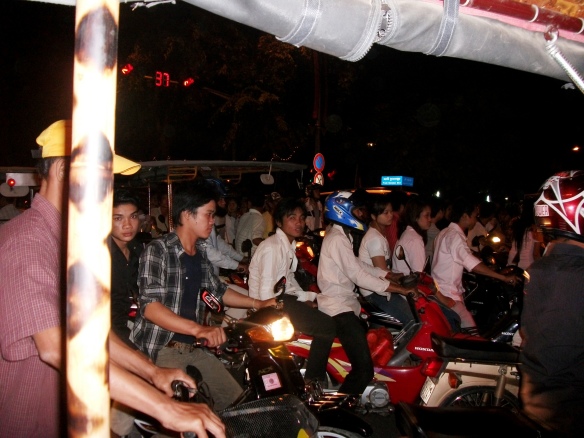 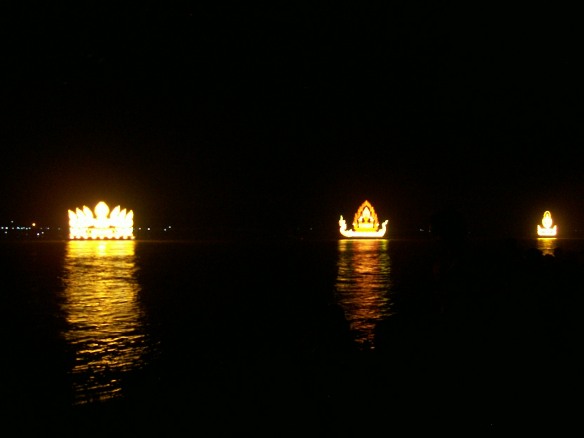 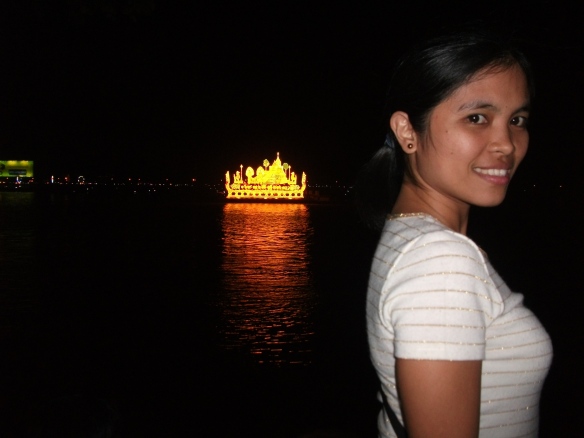 My favorite boat behind me. 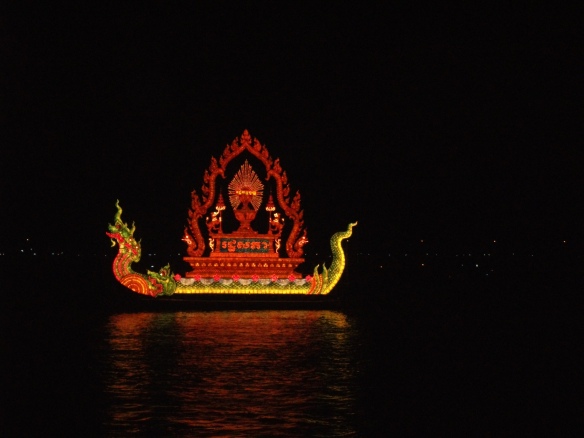 The Water Festival is held once every year usually in November on the full moon of the Buddhist month of Kadeuk. However, for the past three years, Cambodians didn’t celebrate the Water Festival after the human stampede tragedy happened during the 2010 Water Festival celebrations causing more than 300 casualties and due to the floods and death of the late King Father Norodom Sihanouk.

For this year, it will be on the 5th to 7th of November 2014. It celebrates a natural incidence when the River of Tonle Sap and Mekong River reverse the flow of the current. Perhaps it is the only estuary in the world which flows in opposite directions and at different times of the year. 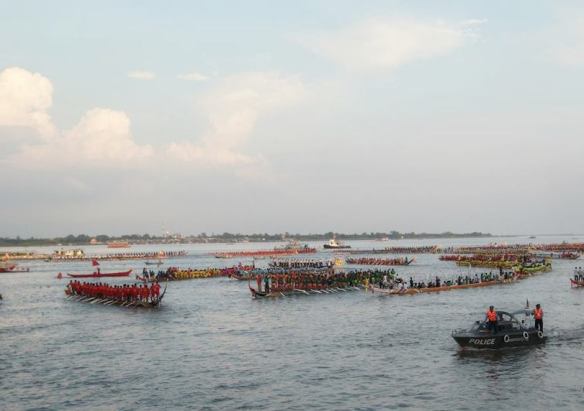 The Cambodians have three important ceremonies during the Water Festival celebration. First is the Loy Pratip, it is a fluvial parade of fascinating lighted boats illuminating up the waterways. Second is the Sampeas Preah Khe, which means the salutation to the moon as Cambodians believed that full moon is a good sign for the coming harvest. The last ceremony which occurs at the midnight is called Auk Ambok because the people gather at the temples to eat “ambok” (flattened rice), holiday rice dish. 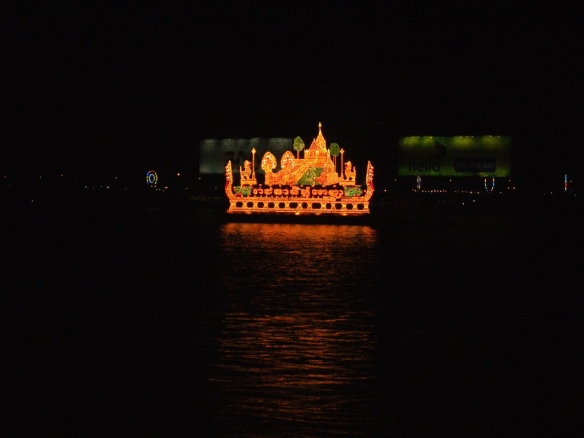 Another jazzy illuminated boat floated slowly on the water surface.

One of the highlight activities for this celebration is the boat race which is to be held in Phnom Penh. I heard that this year there will be around 240 boats which will be participating the boat race lead by competent oarsmen. This activity attracts millions of people from all over the country to the capital of Phnom Penh to cheer their boat team. For many locals it is the only occasion to visit the capital city and to explore the sights of Phnom Penh. Fluvial parades, fireworks and general merriment are also observed. If you like taking photographs, the whole city becomes a photographer’s dream. 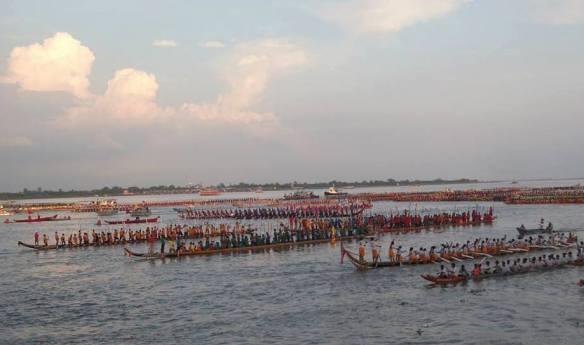 Since Phnom Penh was very crowded during this time, we decided to book a room in a hotel with a river view to be able to watch the boat race and to avoid the throngs of people. We had a whale of a good time watching the boat race.